You Can Play a Tyrant’s Game – But You Still Lose

If there is one thing that history has shown us, it’s that to play games with tyrants is to place yourself in a losing position. The house always wins, and you’re playing against somebody who is more than willing to cheat with extra cards up his sleeves.

Consider that ‘two weeks to flatten the curve’ has now turned into Year 2.

At first, people were told to not wear masks. A woman in Virginia at the 50,000 strong gun rally in Richmond was actually arrested for wearing a mask in January 2020. Then, just a few short months later, the public was now being arrested for not wearing a mask.

The rules had changed

People began wearing masks – as had been decreed upon them – but masks with incorporated one-way valves were then deemed to be unsafe to the world around you. And so, for a brief period of time, the most popular N95 mask designs were banned, and pieces of cloth torn from old denim jeans were now used instead.

Serving staff in Maine went from being treated as human beings to essentially having dog cones placed around their necks.

Then, two masks at once were ordered to be worn.

Stay at home, we were told

And afterward, we saw California have a year’s worth of suicides in a single month, children have been packing psychiatry clinics, and the toll on mental health has been unprecedented – because human beings who have been created as social creatures were locked in solitary confinement on a planetary level.

Don’t go to work, we were told. People complied, and now the lines at food pantries are longer than what we’ve ever seen,

You just need a single jab, we were told.

Then they told us we needed a second.

Then they told us we needed a third, a fourth.

In talking with a paramedic the other day, I was told that the only reason he got the jab – which he didn’t want – was so that he wouldn’t have to wear a mask anymore. Just a few months later, that policy was rescinded, and everybody had to wear a mask once more regardless of jab status.

Are you seeing the pattern here? Decrees are issued – and perhaps they initially seem minor, such as ‘it’s just two weeks.’ People comply with the “minor” decree, and then the goalposts are immediately shifted.

When churches kick out their flock

Churches were told that they couldn’t have more than 10 people in a Sunday school classroom. And people complied.

Goalposts were set, people complied, and the goalposts were promptly moved even further. This is the means by which man is further and further carried into complete and utter tyranny – into the world of concentration camps, of being lined up against the brick wall with his family. This is how man is marched straight into an Auschwitz, a Dachau, or down a Ho Chi Minh Trail.

First, you must comply with what is ‘minor’, and then we gradually move step-by-step into the ‘major’ we would have never even dreamed of in our nightmares.

“Demonize those who disagree with you,” comes their command, and you’ve undoubtedly seen the work of this propaganda first-hand. Because the TV said so, people are now more than willing to go out and begin treating their fellow man as if they are not only the enemy but worthy of public shaming.

What is the next “minor” goalpost here to move the mass of the compliant into? Daisy has covered this subject in her post on the ‘othering’ of society – a Marxist tactic the world has seen again and again.

We all know what comes next – you end up in a camp (if not worse) – it’s just that some of you are too timid to believe it. The TV still has too firm of a grip on your mind, and so, unwillingly, you remain a useful tool for tyrants.

The story is about a Jew in 1930s Germany. Nazi’s had been attacking firearm ownership amongst the populace for a long time – particularly amongst the Jews. The Nazi government ordered a “turn in.” This Jew complied, heading towards the turn-in center with his small pistol. As he waited in line, Nazi police approached him. The Nazi police found the Jew to be in possession of an illegal weapon and sent him to a concentration camp. The man’s name was Alfred Flatow and he would die there.

He attempted to play the tyrants’ game. And he lost.

Are you tired of feeding this Beast our government has become? You have to get outside of the system. Grab our guide to Starving the Beast, FREE, right here.

They inherently have no moral code. Therefore, there is nothing you can do to make them happy. Perhaps lay down and become a human doormat so the jackboot can stomp upon the human face for eternity. Look at Australia – people are protesting and resisting and in turn, having their children taken away, being imprisoned, having essential services cut off, or being taken to camps.

With tyrants, the end goal is power. They are on a personal quest for it – for more of it – and they will never cease their journey. Absolute power is what they are after, and remember, as Lord Acton said it corrupts absolutely.

This is how you end up in a world where Russian lawmakers advocate for the execution of those who disagree with their beliefs, of where Irish lawmakers recommend making it so that large segments of the population are banned from buying food, of a world where Australians begin arresting people in their homes because of Facebook posts talking about organizing a protest.

Tyrants desire power, and they will use ever-increasing levels of force to get what they want.

You can count on it.

Do you intend to further comply? How far will you go before you say no? Share your thought in the comments.

Jeff Thompson is an avid fisherman who likes to spend time sailing on his boat and reading while at sea. 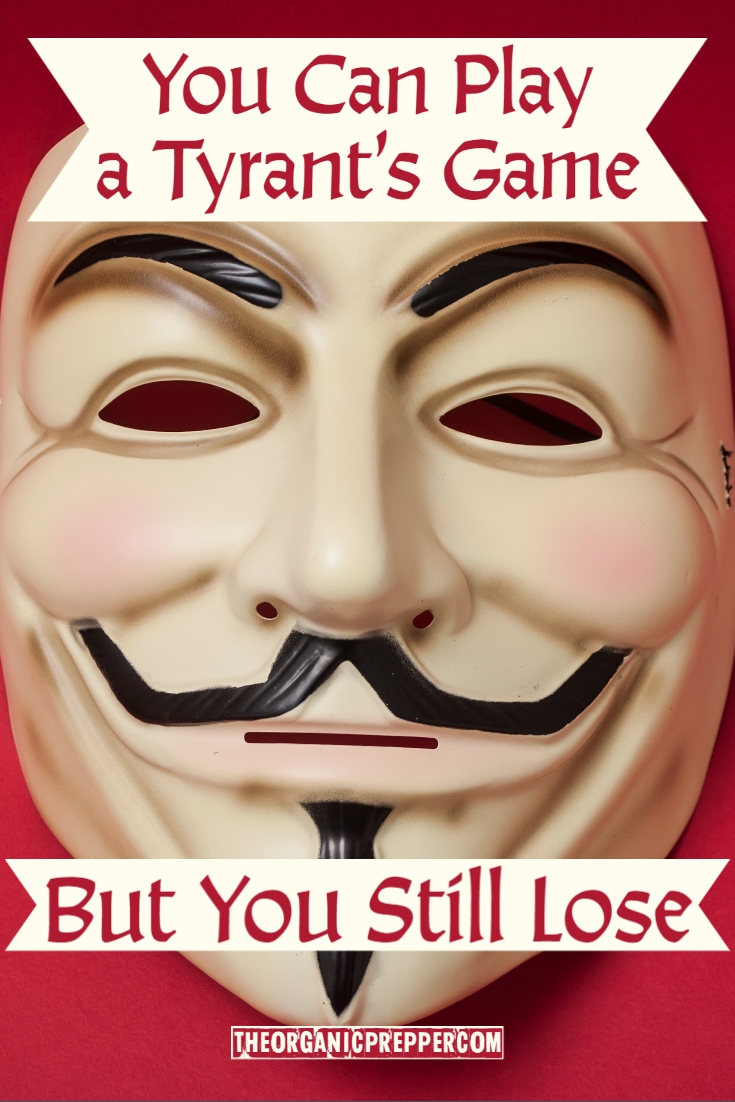 Source
You Can Play a Tyrant’s Game – But You Still Lose is written by Jeff Thompson for www.theorganicprepper.com

Education During an Economic Collapse

A Crypto Primer: What Preppers Need to Know

A Crypto Primer: What Preppers Need to Know

What Will Be Our Legacy as Preppers?

The Government’s “New” Solution to Inflation?