Why You Should Consider a Bulletproof Backpack Insert –

By the author of The Faithful Prepper and The Prepper’s Guide to Post-Disaster Communications.

What can you do if you can’t be present to protect your loved ones?  While there will always be both evil and cowardice on this earth, that doesn’t mean we sit idly by and watch. There are still things we can do about it to keep our family safe, and I think bulletproof  backpack inserts (nitpickers, you know what I mean. “Bullet-resistant.”) may be something to consider. I tested the Streetwise 3A Backpack Insert from The Home Security Superstore, and here is what I found.

What does Level IIIA stop?

The short answer? Most handgun rounds. The long answer would read .22, .38 Special, .380, 9mm, .40 S&W, .357 Magnum, and .44 Magnum. It’s my understanding that IIIA soft armor will protect against shotgun rounds as well, but the manufacturer doesn’t state this, and there’s a world of difference between a slug and birdshot.

If facing a shotgun, I’d much rather have IIIA than nothing, though.

If you want to be protected from rifle rounds, you’re going to need hard armor, and when you switch to that, it’s an entirely different ballgame. The plates are heavy and unlikely to be something anyone would want to carry for an extended period of time in a backpack.

Should you be looking for something that will stop common rifle cartridges, you’re likely going to want to look at Level III or III+.

How practical is putting an IIIA panel in a school backpack?

This was the first question I had, and so, the first thing I did was see what this panel felt like in a standard “school” backpack.

I found that the panel was absolutely massive and fully covered the torso of a fully grown man. While I really liked how much surface area the panel covered, I knew that it was much larger than a lot of the plate carriers that are available on the market, and so I had some questions as to how this panel would fit into a book bag.

It’s large – yes – but it does nestle in nicely within a school book bag, covering the entire area within the back of the bag. In the event of a mass killer event, somebody would be able to cover a great portion of their body behind this bulletproof panel.

Not if they’re soft armor, they’re not. If you’re looking at hard armor plates, then absolutely, yes. Heavy backpacks are already the culprit in a number of back-related issues for school kids, and I knew that this wasn’t going to be a feasible option if these were standard steel plates.

I was pleasantly surprised to find how light this panel is, though. It weighs less than two pounds. I carried the panel-protected backpack with me throughout the course of a workday, and there was minimal fuss whatsoever. You really don’t even notice that it’s there.

Is a backpack a discreet means of carrying body armor?

There’s no doubt in my mind about this. This makes for the most discreet means of wearing body armor on a daily basis that I’ve ever seen. Nobody is going to wear a plate carrier within “normal” society and not stick out like a sore thumb. Even the soft armor I’ve seen people wear underneath their clothes will make one look like a puffy oddball. Everybody can clearly see that armor is being worn.

A backpack is ubiquitous, however, and there is zero profile with this panel whatsoever. It’s not hot, it weighs virtually nothing, there’s no profile and, being Level IIIA, it offers protection against a great number of pistol calibers. There’s still going to be broken bones, severe bruising, and possible internal damage if somebody takes a bullet while wearing this panel, but they’ll have a much better chance of survival compared to if the bullet went through them.

I don’t know if you’ve been paying attention to some of the videos that are slipping through the media of late, but I’m seeing a number of them where “protestors” blocking the road are pulling/pointing weapons at people attempting to drive down the road. This is another instance where I think a lightweight bulletproof panel could be of use.

No armored car for me.

While driving an armored car would be awesome (I’m jealous, Fabian), I can’t afford it.

As others have pointed out, a car is not cover either. A car is concealment. You may think that metal door is going to protect you, but it won’t. The only cover you really have with a car is from the engine block and parts of the wheel. Getting out of a car when a gun is pointed your way takes precious time, as well. This is where the backpack panel can come to play once more.

I can easily nestle the backpack between my body and the door, giving myself a better layer of protection. 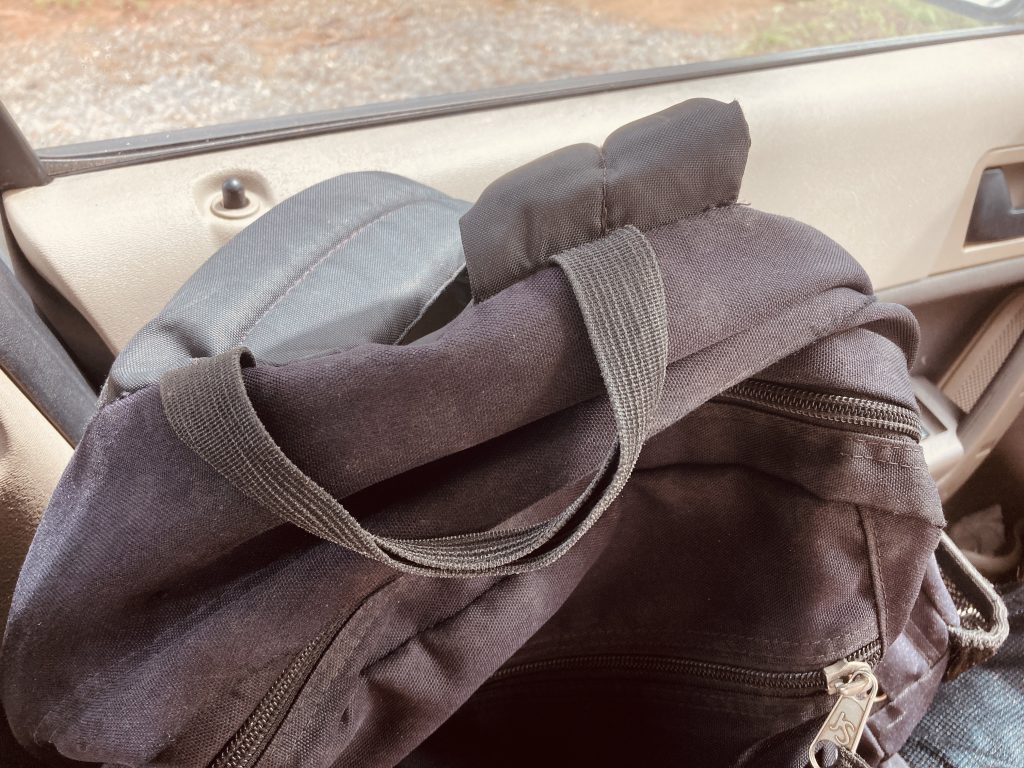 The only question I have about this is if you’ll want some means to brace the panel. In other words, if a bullet comes through and hits the upper right corner of the panel, I have suspicions that the panel would just “give,” bending out of the way by the force of the bullet. I can’t help but wonder if a large book or some other stiff board-like object wouldn’t give it the support (I think) it would need.

If I stick my copy of The Encyclopedia of Herbal Medicine – a hardback book – behind the panel, would this risk of giving be reduced to nil? It would add about two pounds to the backpack (and give me something to read, ha), but it makes some sense, doesn’t it? I thought about using my router to cut out a Streetwise panel-shaped board, but it felt a little forced/indiscreet. If you know more about ballistics than I do, give us your thoughts in the comments.

Other additions to a school backpack?

A tourniquet, pair of disposable gloves, and a chest seal could easily be thrown into a book bag as well. If it’s going to take over an hour before EMTs are able to enter the building, people are going to die from bleeding out. Interestingly, bleeding out is the primary cause of death in military settings. If we not only give a kid the means to shield themselves from attack but the ability to treat their friends as well, lives could be saved.

If you have a spouse or kid who doesn’t like to carry a gun on a daily basis, at the very least, perhaps you can get them to carry a panel instead.

Not fun stuff to think about, but it is something that deserves thought. Let us know what you’re thinking in the comments below.

Aden Tate is a regular contributor to TheOrganicPrepper.com and TheFrugalite.com. Aden runs a micro-farm where he raises dairy goats, a pig, honeybees, meat chickens, laying chickens, tomatoes, mushrooms, and greens. Aden has four published books, The Faithful Prepperand The Prepper’s Guide to Post-Disaster Communications, and Zombie Choices. You can find his podcast The Last American on Preppers’ Broadcasting Network. 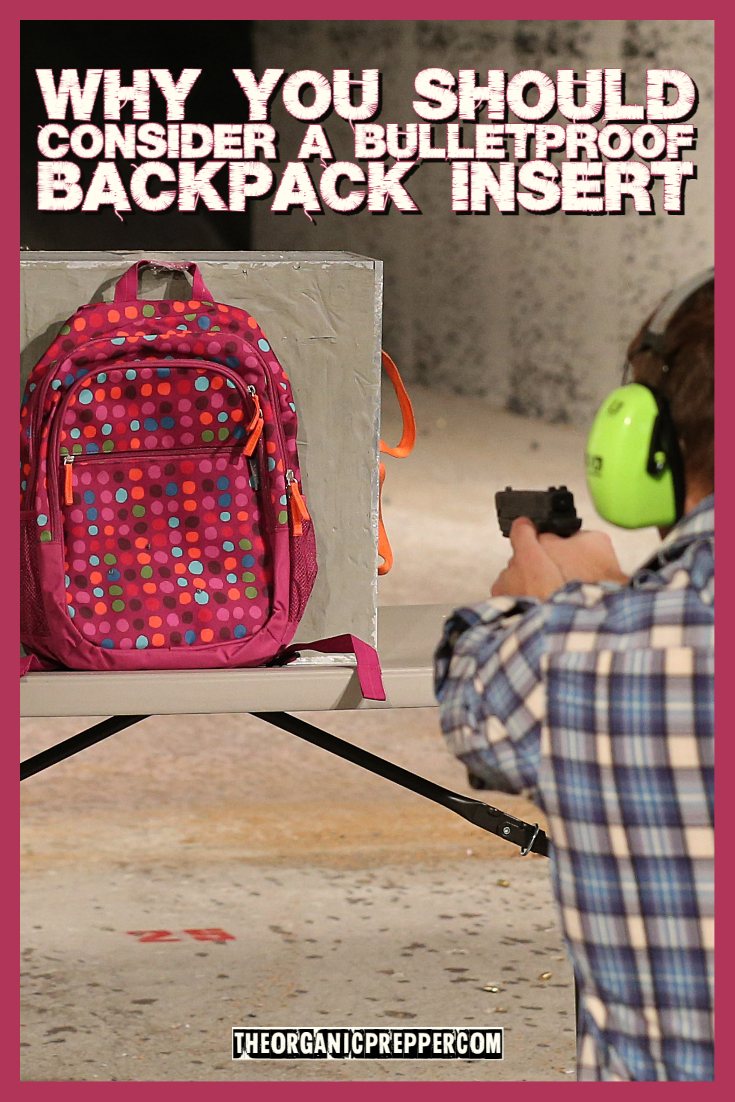 Source
Why You Should Consider a Bulletproof Backpack Insert – is written by Aden Tate for www.theorganicprepper.com