Why Radio Gear Just Might Be the Perfect Barter Currency

‘Transitory’ inflation never was. This was permanent from the beginning. Inflation in the US is here to stay and is only going to grow worse. While precious metals are great, I think there’s much to be said for preparing for a barter economy as well. And as Selco pointed out in a prior article, this very well may be the area that the US is headed for patriotic Americans.

Many people understand the importance of barter in a collapsed society and store silver coins, ammo, alcohol, and so on in order to be prepared for such.

But what if there were something other you could store?

Something that may not be as dangerous to be known for storing as a warehouse full of booze? I think that one of the most important things you’re going to want post-disaster is a reliable means of communication and receiving news from the outside world.

For such, you’ll need a radio.

Other people are only going to learn this too late, and if you’re the radio guy in a barter society, you really have the potential to do pretty well. So without further ado, here are my thoughts on bartering off your radio gear.

Radios are going to be in short supply after a massive disaster. The cool thing about bartering them is that they’re a portable, compact, and practical unit of currency in a barter society. Unlike a gold coin worth $2000+ US dollars, which you’ll never be able to trade fairly for a day’s food, a radio can easily be involved in daily transactions.

Here are my thoughts on what you should consider with bartering a radio.

These serve as a fantastic source of information from the outside world, and if you end up in a situation where the world has gone dark, that’s exactly what people are going to crave. I consider a disaster without one of these similar to backpacking without a watch – the lack of information drives you crazy.

Should there be an internet shutdown, grid failure, or so on, these will still let you hear what is going on in the rest of your country (at least from the ham radio operators and stations that are still on air).

The first thing you need to know about walkie-talkies is that you will never get the range out of them that they advertise. Think maybe a mile, as that is what you can realistically expect. That can prove perfect for retreat security, however. Out of all the radio options out there, I think walkie-talkies easily could prove to be the easiest to barter option.

I don’t foresee these being something you have to worry about sitting on your shelves for long. People are going to immediately know what they’re for and want them post-collapse.

(Food can easily be bartered post-collapse. Check out our free QUICKSTART Guide on building a 3-layer food storage plan to get yourself well-stocked.)

For those looking at setting up a comms network on a larger scale, I think CB radios work great. They’re about as straightforward and intuitive to use as possible, they give you a respectable range, and you can get them fairly inexpensively right now.

While I personally like models that are single sideband (SSB), you can get some very affordable units out there without SSB that could prove of benefit with trade. Quality-wise, I’m a fan of the President brand. Uniden is well-known within the world of CB as well, but they don’t seem to hold up for as long as President does.

If you’re living in a world where there is no law, you probably want to avoid ticking people off by trading them a radio that’s only going to break in a year’s span.

Why not stock a few extra of these for barter? If anything, you could use them for your own survival retreat. Should you decide that you can spare a few of them in exchange for food, fuel, healthcare, or the like, then you’re all set to do so, and you very well may have just added another node to your community’s radio network in the process.

Bartering radios is a win-win for you here. If you do decide to choose a different model than the UV-5R, I still highly recommend that you stick with the 2m/70cm bands. These are where the majority of the traffic is going to operate. Also, keep in mind that this would have to be a WROL situation for you to use ham radio bands without a license.

The radio is really only as good as the antenna. A lot of people don’t realize this until it’s too late, and I can guarantee you that there are preppers out there who will come to the same conclusion after a disaster. Here are my thoughts on bartering antennas.

Whip antennas for HT units work great for boosting one’s range over what they would have with a stock HT antenna. If I’m sitting at my kitchen table in the evening listening to local nets, these are fantastic.

If I’m out backpacking, they’re rather annoying unless you keep the antenna stowed away until you need it. It won’t take long with a stock ham radio antenna for people to realize that they’re going to need an antenna upgrade, however, and a supply of these could easily prove to be a source of barter for you in a disaster economy.

If anything, this is the most overlooked aspect of radio preparedness. You can have the fanciest radio in the world, but if you can’t connect it to your antenna, you have an expensive box. Here’s what I would look into…

These are really beneficial if you’re building your own antennas or are trying to make use of the infrastructure already in place you’ve found around you post-collapse (e.g., you find an antenna setup for a ham radio, but the ham radio is gone). The only people that are really going to need these are those who know how to do such. This will mainly mean that it’s going to be ham radio operators that will be looking for these.

That considerably shortens your market, but these are going to be something people are going to truly need. They’re cheap, take up virtually no space, and are indispensable. I see no reason why they couldn’t serve as a fantastic radio barter item post-collapse.

This is another item ham radio operators are desperately going to need post-collapse. Nobody ever seems to have enough of this on hand. If you want to make your own antennas, you’re going to need coax. If you make sure that the type you pick up already has the type of adapters on the end that you need, you’ll save yourself a bit of trouble.

People are going to need ways to keep their radios topped off, and Chinese stuff tends to break. Given that Chinese radios are everywhere in the US, it makes sense to keep an available supply of charging equipment.

I personally wouldn’t go overboard in this department – I would look at radios first and foremost – but this is a potential option for barter post-collapse.

Two is one, and one is none. These things break, and when they do, you’re straight out of luck if you only have one. I personally don’t think I would stock a lot of these for barter purposes, but a few extras may be something worth considering.

These would work best for trade with the large survival retreat. Here are my thoughts on bartering something like this. First, it has massive potential. Somebody with a retreat full of UV-5Rs would want it. It’s going to be the most efficient and organized method they could have to keep their radios topped off.

However, I think you do need to consider whether or not a retreat that has radios already would have thought of getting one of these already. I think you could create demand here by having a steady supply of radios to introduce into your community via barter – new survival retreats are going to pop up amongst non-preppers – but that’s going to be something you’re going to have to weigh the pros and cons of.

It does no good to have radio gear prepped if you don’t know how to use it.

This is all the more reason to check out my most recent book, The Prepper’s Guide to Post-Disaster Communications. If you’re more cartoon-minded than engineer-minded and have been putting off getting your communications preps in order because the bulk of the information from radioheads you find is too abstract, you’re going to want to check this book out.

I’m far from being an engineer. My brain just doesn’t work that way. If you’re looking for as simple of an explanation of disaster radio as possible (complete with cartoons drawn by yours truly) you’re going to want to check this one out.

Bartering your radios (the extra ones) could help keep your family fed.

Barterable goods and skills are vital in economies where money no longer exists, cash is outlawed, or certain people are prohibited from making transactions without particular papers. As such, I think this is something preppers throughout the world need to strongly consider.

What do I have that could help my family get the goods and skills we need post-collapse? How could I continue to function in a cashless society?

For you, radio very well may be an option.

What are your thoughts on bartering your radios? Is there other radio gear you believe would make a good choice? Do you think this is a viable alternative, to begin with? Let us know in the comments below! 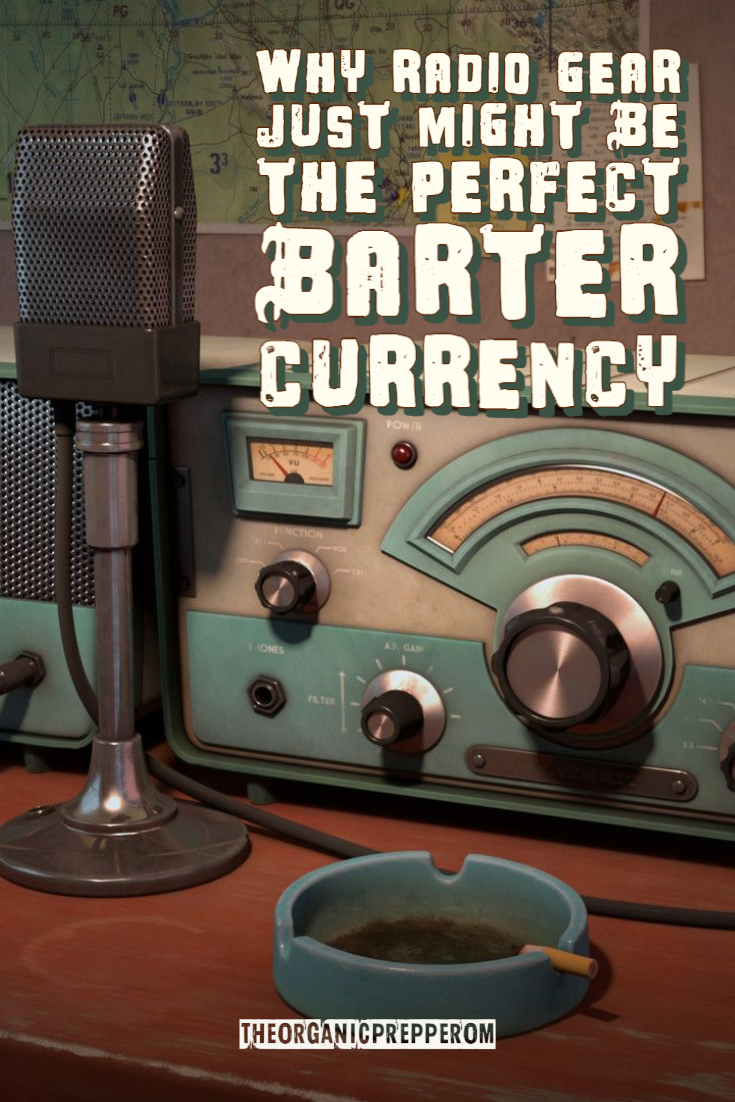 Source
Why Radio Gear Just Might Be the Perfect Barter Currency is written by Aden Tate for www.theorganicprepper.com

10 Things About Prepping I Wish I Knew 20 Years Ago

Here’s What We Ate During Week 1 –

Here's What We Ate During Week 1 -