Pollinators, the 4 Biggest Threats They Face, and Why You Should Care

Besides drought, disease. and supply chain disruptions, another problem that could cause food shortages is a lack of pollinators. 87% of plants require pollination to reproduce. 1/3 of food crops require pollination. In the US, beekeepers have lost 30-42% of their colonies every year since 2006.

While it’s true that many plants, such as squash, can be hand pollinated, have you ever done an entire agricultural field that way? And what about crops with tiny flowers, like cucumbers? One who can reliably hand-pollinate a cucumber is a better gardener than I! Insects do this job SO much better. In this article, we will look at pollinators and the problems they’re currently facing.

Let’s talk about the birds and the bees!

Seriously, both pollinate plants. Bees are the most well-known pollinators, but they’re far from the only ones. Birds, wasps, butterflies, and beetles also pollinate various plants. Moreover, honey bees aren’t the only species of interest. There are 20,000 species of bees worldwide and 500 in my home state of Wisconsin. The most common pollinators here are honey bees, bumblebees, Mason bees, leafcutters, sweat bees, miners, and small carpenters.

I see bumbles and Mason bees in my yard primarily. The bees are collecting pollen to feed their hive. They’re grocery shopping, basically, and they visit up to 1000 flowers per trip. Butterflies, moths, and other insects are doing the same thing: feeding their young. As they go from flower to flower, the pollinators spread pollen, allowing the plants to reproduce. Many fruits contain seeds, of course. So, everyone benefits from one of nature’s delightful balances.

What are the nesting habits of bees?

Some bees are more social than others. Honey bees, for example, prefer hives, while bumblebees are a bit more solitary. Exact nesting habits depend upon the species. However, bees generally prefer to reuse spaces such as chipmunk or rabbit burrows, preexisting holes in wood or hollow stems, compost piles, and in-ground. It’s not uncommon to find squash bees sleeping in the closed squash flowers during the day.

Artificial bee houses are becoming more common, and you can easily make them. Check out this site for principles of construction and plans.

Native vs. nonnative plants and why it matters.

The scientific definition of a native plant is as follows. The plant in question:

By planting species that are native to your area, you support the pollinators that adapted to those species. When considering pollinators other than bees, you’ll want to consider both the larval and host stages of the organism. In the case of butterflies, both the caterpillar and the butterfly will need food.

Resources to help you determine which species of pollinators and the plants they love in your area include your county Extension office and various beekeeping societies.

These tiny mites are parasites that feed on honey bees. Their entire life cycle takes place within the honey beehive. Adult females lay eggs in the bee’s brood cells. Females feed on adult honey bees, whereas males parasitize both larvae and pupae. The result is a significantly weakened bee. Females are also excellent virus vectors, spreading additional diseases throughout the hive. Their slow initial rate of population growth makes it difficult to detect infection early. [source]

There are several ways to control them, from buying mite-resistant honey bees to using smaller cell combs to brood break and trapping. Chemical controls include formic and oxalic acids, thymol, hops beta acids, and Amitraz. [source]

Pollinator habitat has been fragmented and lost to agriculture, resource extraction, and human settlement. Human activities have also degraded habitats. Although altered landscapes can provide flowers to feed, landscaping destroys nesting and overwintering sites. Many bees and butterflies are habitat-specific, meaning they don’t just pick up and move to another location. Destruction of their native habitat often means the destruction of the pollinators in that area. Ground-nesting bees need loose soil that they can dig in. Trampling that soil removes nesting areas and might even destroy the nest.

Fragmentation of the habitat causes a loss of biodiversity. It also means that pollinators must fly further to obtain pollen. Some species can do this. However, weak flyer species will often go extinct. Habitat needs to be large enough to support diversity. Edge effects, those spots around the edges where habitats meet, also matter.

Colony collapse occurs when all worker bees leave the hive, leaving only the queen and immature larvae behind. Since a colony cannot survive without its workers, the hive will eventually die. Causes include disease, pesticide poisoning, the Varroa mite, habitat change, inadequate/poor nutrition, and several different stressors. Neonicotinoids, especially imidacloprid, have been linked to this problem.

Pesticides are a massive problem for bees and other pollinators. Insecticides aren’t picky about which insect they kill, and overuse destroys the natural soil fauna. Soil fauna includes earthworms and beetles as well as beneficial microbes, including Rhizobium and mycorrhizae. It’s better to build up your soil and plant-resistant varieties if possible. If you must use pesticides, use only what’s needed to solve the problem. It’s also helpful to time application for when the pollinators aren’t out.

And above all things, avoid neonicotinoids! These pesticides are:

A number of these were pulled from the regular market in 2019, and the remaining are up for re-registration in 2022. However, it’s still possible to purchase plants and seeds treated with these pesticides. Home Depot is one of the retailers requiring that plants so treated are labeled. So read the label carefully before you buy! Lowe’s has pledged to stop its use of these entirely, as have many other stores.

For more information on this class of pesticides, go here and here.

How can we help as gardeners?

We can help pollinators in many ways. By providing proper habitat and native species, we support the life cycle of our pollinators. Minimizing the use of pesticides removes a heavily toxic substance from the environment, and timing the use also helps. Spraying after sunset when the bees aren’t out gathering pollen is better than spraying while they’re out and about!

Putting up a bee house can help, and putting off the first mow of spring is also helpful. Mowing can destroy the nest. It also removes dandelion and other flowers that appear early, often the first food for pollinators coming out of hibernation. It’s a matter of enlightened self-interest. By supporting our pollinators, we support our gardens and help stabilize our food supply.

What can you do in your area to support pollinators?

Have you done anything differently in your garden to help? Do you have other helpful suggestions or facts you would like to share? Let’s talk about the birds and bees in our comments section!

Jayne Rising is a gardener and bookworm with a BS from the University of Wisconsin and a Master Gardener certification. She’s been growing food on her small urban lot since 2010 and teaching others how to do it since 2015. She’s involved in a number of local urban agriculture initiatives, working to bring a sustainable and healthy food system back into the mainstream. 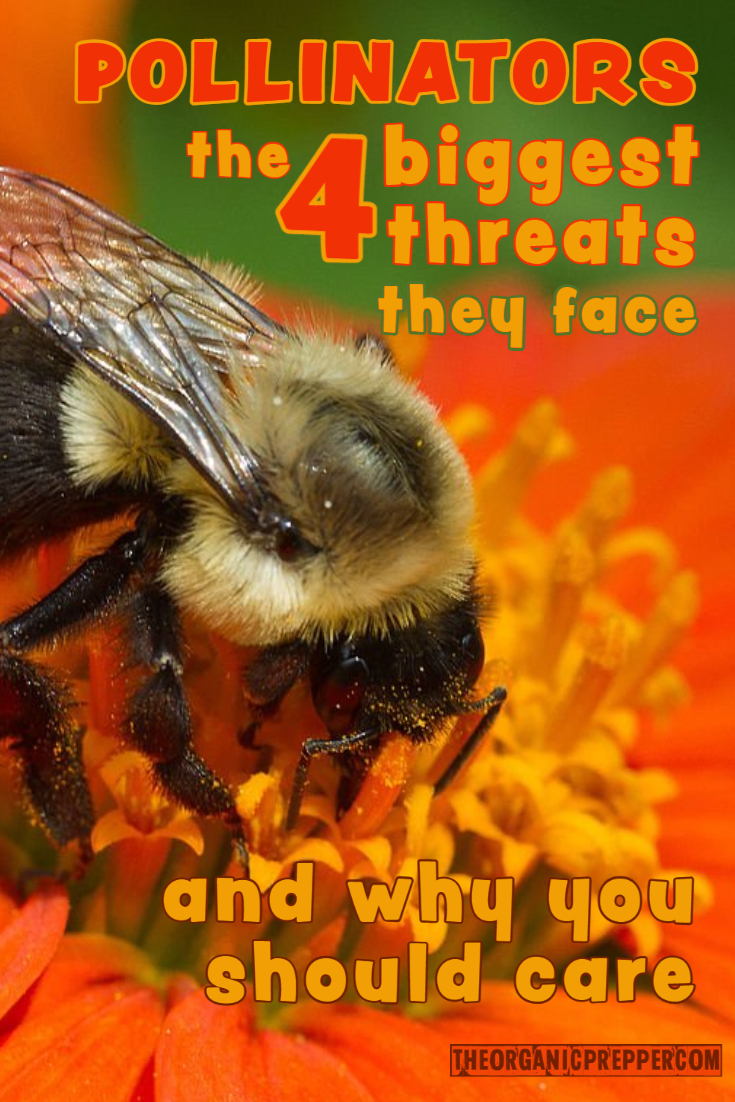 Source
Pollinators, the 4 Biggest Threats They Face, and Why You Should Care is written by Jayne.Rising for www.theorganicprepper.com

Mentally Prepare Yourself for the EPIC Economic SHTF That’s Coming

Afghanistan: What Was the Point?

Afghanistan: What Was the Point?