Is Nuclear Winter a Myth?

By the author of The Faithful Prepper and Zombie Choices.

We’ve covered nuclear war a bit in the past here at The Organic Prepper, but as I’ve pointed out before, I believe that it is high time that you buckle down and get serious about this genuine threat. People fear what they don’t understand, and a large part of the fear involved with nuclear weapons is that they are a mysterious topic to the average American.

Nuclear weaponry? Isn’t that something from The Cold War? Why do we have to worry about that now? Hollywood, Carl Sagan, and others have most certainly done their part to popularize a number of nuclear weaponry myths. But that’s what I’d like to take a look at today.

What are the most popular myths out there involving nuclear war? Perhaps, if we can help to dispel some of these, we can help people to realize that A) nuclear war is survivable, B) there are action steps we can take to protect ourselves, and C) in the event of a nuclear strike, we won’t find ourselves absolutely clueless.

Let’s look at one of the most common:

Myth – A nuclear exchange will result in a nuclear winter where the sky will darken and temperatures will plummet.

This theory began in 1982 when German environmentalist Paul Crutzen conceived the idea and gained a lot of momentum as time went on, largely thanks to Carl Sagan. Interestingly enough, throughout The Cold War, there was a massive push by the Soviets to change the common American’s perception of a wide range of issues. Disarmament was one of these issues Soviets discretely tried (and succeeded) in impact within the United States. (Read page 82 of John Stormer’s None Dare Call It Treason.)

KGB defector Sergei Tretyakov actually stated in 2000 that the KGB was responsible for the entire nuclear winter hoax.

So, if Soviet scientists pushed the notion of a nuclear winter, the next question is this: Why?

Because it spread fear in America. Nobody wants to fight a war they can’t win, and terror gets people to quit thinking rationally. If you can spread the idea that a nuclear exchange will only hurt yourself because of an inescapable nuclear winter, then you can help people to begin to do the mental gymnastics necessary to think that laying down their own rifles will cause their opponent (with a rifle) to magically become harmless.

Of course, in this case, we’re talking about nuclear weaponry, but the point remains: the nuclear disarmament movement was largely sponsored by the Soviets and was based on a disinformation campaign.

According to Cresson Kearney’s excellent book Nuclear War Survival Skills (he actually received the Army’s Decoration for Distinguished Civilian Service in 1972 because of how many Americans he helped prepare for nuclear war), the idea of a nuclear winter is quite simply untrue.

A nuclear strike would cause a temperature reduction (perhaps of up to 20 degrees), but this would only last for a number of days. It wouldn’t result in a season-long time of frigid temperatures and the death of plant life.

What Kearney points out would be the real threat after a nuclear strike is the destruction of the supply chain. Farmers would not be growing food, vital supplies would not be getting shipped out to where they’re needed, and all imports would likely be halted as well.

Is nuclear winter a myth?

This is in contrast to the leftist media that seems to almost be hoping for a nuclear winter (to combat “climate change,” of course).

After Hiroshima and Nagasaki, we didn’t see a nuclear winter scene play out over the following years. Admittedly, however, these were air bursts rather than surface detonations.

And let’s not forget about the creation of the Tsar Bomba, the largest nuclear weapon ever created (that we know of). First tested by Russia in 1961, the Tsar Bomba was 1570x more powerful than Hiroshima and Nagasaki combined. Granted, the Tsar Bomba test was performed in the air (at 13,000 feet) and the shockwave reflecting from Earth kept the explosion from reaching the ground, so the amount of radioactive fallout wasn’t anywhere near what it would have been had the bomb been detonated on the ground, but it is something to think about. All brick and wooden buildings within 34 miles of ground zero were completely destroyed, however.

Also, to be consistent, let’s not forget that Bill Gates currently has a plan to block out the sun by spraying particulates into the air. Admittedly, none of the scientists involved in the program know whether or not their experiment will work or not, but it does stand to reason that if Gate’s particulates could result in cooler temperatures, a nuclear weapon could as well.

For how long though, is the question.

Kearney’s book was published in 1986, well over two decades after the Tsar Bomba was detonated. The whole earth knew when the Tsar Bomba was tested as well. It was no secret. I’m not even sure it would be possible to keep a Tsar Bomba explosion secret. Kearney most certainly had to have taken a Tsar Bomba-type ground explosion into his research when he came to the final conclusion that nuclear winter was a mythical component of a nuclear exchange.

Personally, and I’m no physicist, I think that what Kearney says makes the most sense.

I honestly don’t think that a nuclear winter is something that people need to concern themselves with. I believe that nuclear fallout would be a much bigger concern, and, really, as long as you are preparing your family with food/water, off-grid heat, and warm clothing, you would be about as prepped as was possible for a nuclear winter perchance Kearney was wrong.

What are your thoughts, though? Is there more you can add to the conversation? Let us know in the comments below. 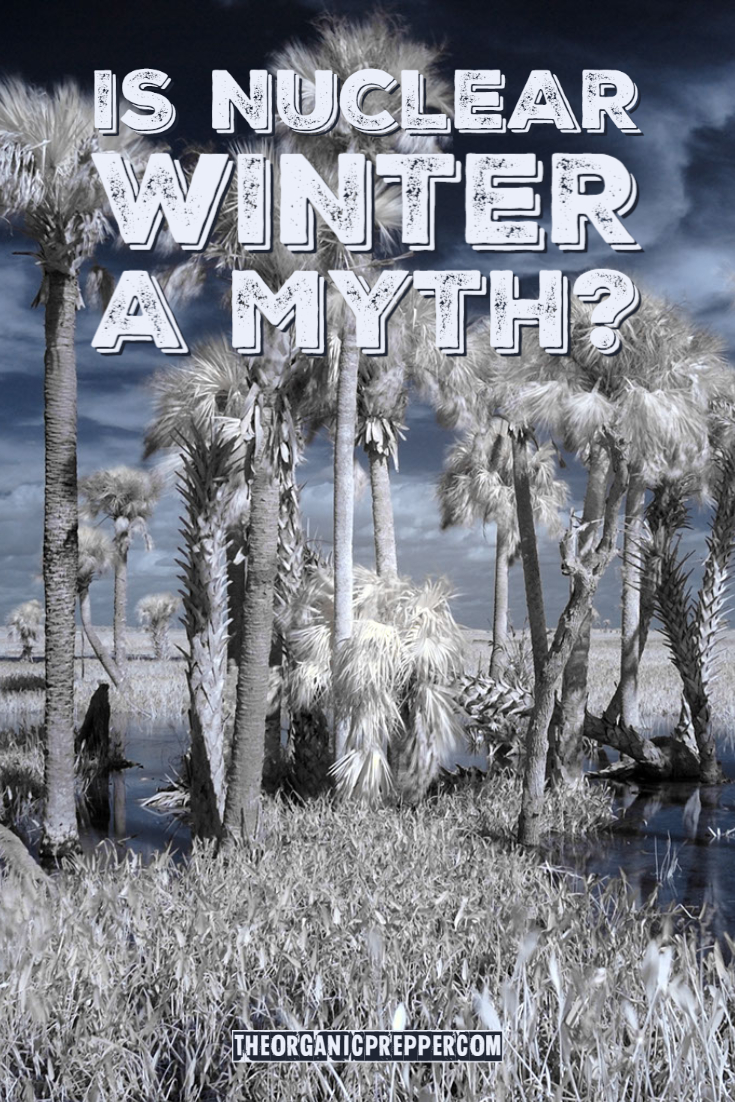 Source
Is Nuclear Winter a Myth? is written by Aden Tate for www.theorganicprepper.com